CASPro
A-PULSE CASPro® is a hospital setting stand alone, all-in-one device for the measurement of Central Aortic Systolic Pressure (CASP) in a clinic or hospital setting. It is empowered by EVBP technology; a FDA listed and patented technology using modified applanation tonometry on the radial artery at the position of the wrist. It is completely non-invasive, convenient and easy-to-operate. 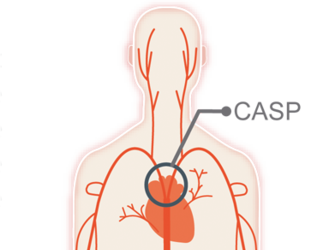 IS IT SUFFICIENT TO MEASURE THE BRACHIAL BP ALONE?
As seen from the diagram below, two persons can have exactly the same brachial BP (125/80), but different CASP (105 vs 120 mmHg). It is important to know the CASP as it has been shown in recent studies to be the strongest independent indicator for strokes, heart disease and their survival rate.

More importantly, different drugs can have different and varying effects on the CASP even as they lower the brachial pressure*. As a result, some medications may be detrimental to the patient even as the brachial BP is being lowered.

The reason for not measuring the CASP widely is mainly due to the fact that, to date, there is no device accurate, affordable and simple enough to be used in a clinic or hospital setting. The present technique is either an invasive angiographic measurement, or using very expensive and cumbersome systems which is only used in research labs.

THE CASP NORMAL REFERENCE RANGE
The normal value of CASP is different for each person, depending on their age and gender. The CASP is considered normal when the pressure is within the two red lines.

HOW CAN WE USE A-PULSE CASPro ?
It can be used in: